Skip to content
Final Fantasy XII remastered was finally annonced! Entitled “The zodiac age”, it will be based on International zodiac job system version of Final Fantasy XII. But what is this version, exclusive to Japan ?
Final Fantasy XII was released on March 16, 2006 in Japan. For some Final Fantasy, like FF VII or FF X, Square Enix add some improvement before released them on the west. But not with FFXII, so the version released on October 31, 2006 in US, was similar to the original Japanese.

It’s really interesting to learn that a job system was planed to be a part of the original version, but development team was afraid that people don’t understand the system well. So, they create the licence bord system, allowing players to create their own jobs. Instead, players use all the license board and made clones of the same character! So a small team, with only five people, works on a new version with Jobs original idea.
Square decided to re-released an international version, on August, 2007, but only in Japan. It was part of Final Fantasy 20th anniversary and Ivalice Campaigns.

The new name, “Zodiac job system”, refer to the introduction of jobs for characters, wich cannot be change after selection. There is twelve jobs for the twelves zodiac signes. In fact, many things depend on the job you choose : abilities and equipment are dictated by the job, and there is twelve licence boards. Guests and Espers are also fully controllable. There is many other improvement, well listed by Final Fantasy Wikia.
Also, the edition content bonus DVD present in the US collector edition and a small artbook.
Let’s go for the presentation!
A totally new artwork for front and back covers!
Under the sleeve : a small artbook and the game box

Artbook presents all the main characters

Inside the game boxe

Game cover is not black, there is a judge artwork on it. But it’s hard to take a good picture! 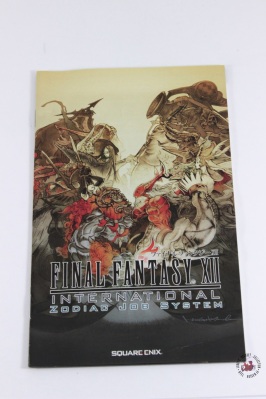 That’s if for this edition. We hope “the zodiac age” remake will be as beautiful as this one. 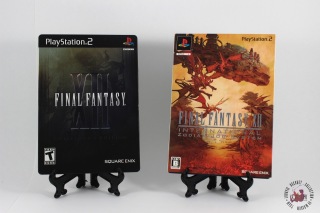